Last week, I wrote about having some panic attacks. It was a bit rough. As I was talking through the week with my therapist. we discussed all the things I discussed in my update.

At the end of the session, I remembered one other aspect that might have contributed to my struggles. “Oh, and I just finished tapering off one of my medications a couple days ago.”

My therapist laughed out loud, and said:

I told her I have been discounting any possible effects of changing medication because I wanted it to be the right thing to get off this one. She pointed out that both are likely to be true. Even if this is the right change to make, it is still going to throw my body off.

As I talk about mental health, I often describe the process of figuring out psychiatric medication as chemical experimentation. It is hard!

I remember when I was first trying to figure out anything that might help—the process was infuriating. The doctors were asking me to use my brain, which was damaged, to identify what was damaged with my brain. “Can’t you just jab something in my damn arm and tell me what is wrong?”

The challenge with this phase of experimentation is how personal it is. There are lessons that can be learned from others, but everyone responds differently to medication. It is helpful to remember how imprecise this “science” is. Be patient with yourself and expect to have a rough time figuring things out. Don’t be surprised when life seems inexplicably hard at times.

Last month, I wrote about grieving the disappointment of having to postpone an anniversary trip my wife and I had been planning. We rescheduled for this past weekend. It was finally here!

But as it approached, it seemed that we may have further disappointment. A cold started working its way through our kids, and I was getting nervous. The morning of the planned trip, our nine-year-old woke us up with the news that he felt sick.

I quickly realized that I needed to take some time before the other kids got up. I recognized that I was starting to panic a bit, and was feeling despair. Interacting with the kids in my state was likely to cause more trouble.

As I have mentioned the past couple weeks, my friend Mike Rohde and I have been preparing a workshop on meditative sketchnoting. Thanks to that preparation, I immediately thought of sketchoting the situation and my feelings. 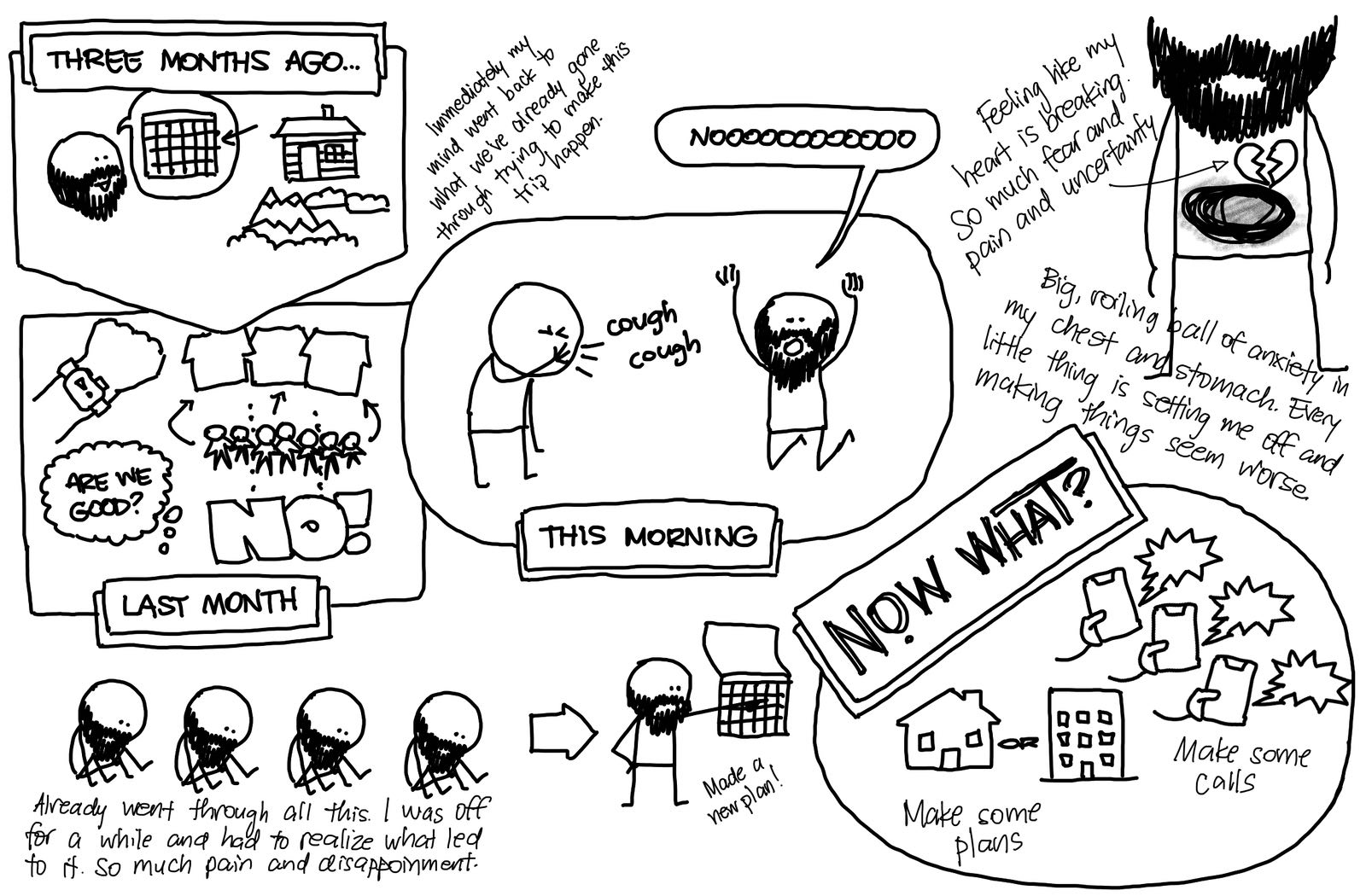 It was a huge help.

I realized that I couldn’t know what would happen. But whatever did happen, I would be able to cope with it. I made a plan for what to do to move forward, and tried to lean in to the uncertainty.

Thankfully, in the end, the trip worked out and we had a great time. Even though we both got the cold our kids had, we still enjoyed our time together.

But I was prepared for it to not work out as well. It felt good remembering that I have a tool and a strategy for processing my difficult emotions.

A couple friends planned to come to my office recently for a brainstorming session. I decided that I needed to get a white board to make collaborating easier, which would require some rearranging.

So naturally I started sketching.

While I watched football, I drew up my office and started moving the furniture around. 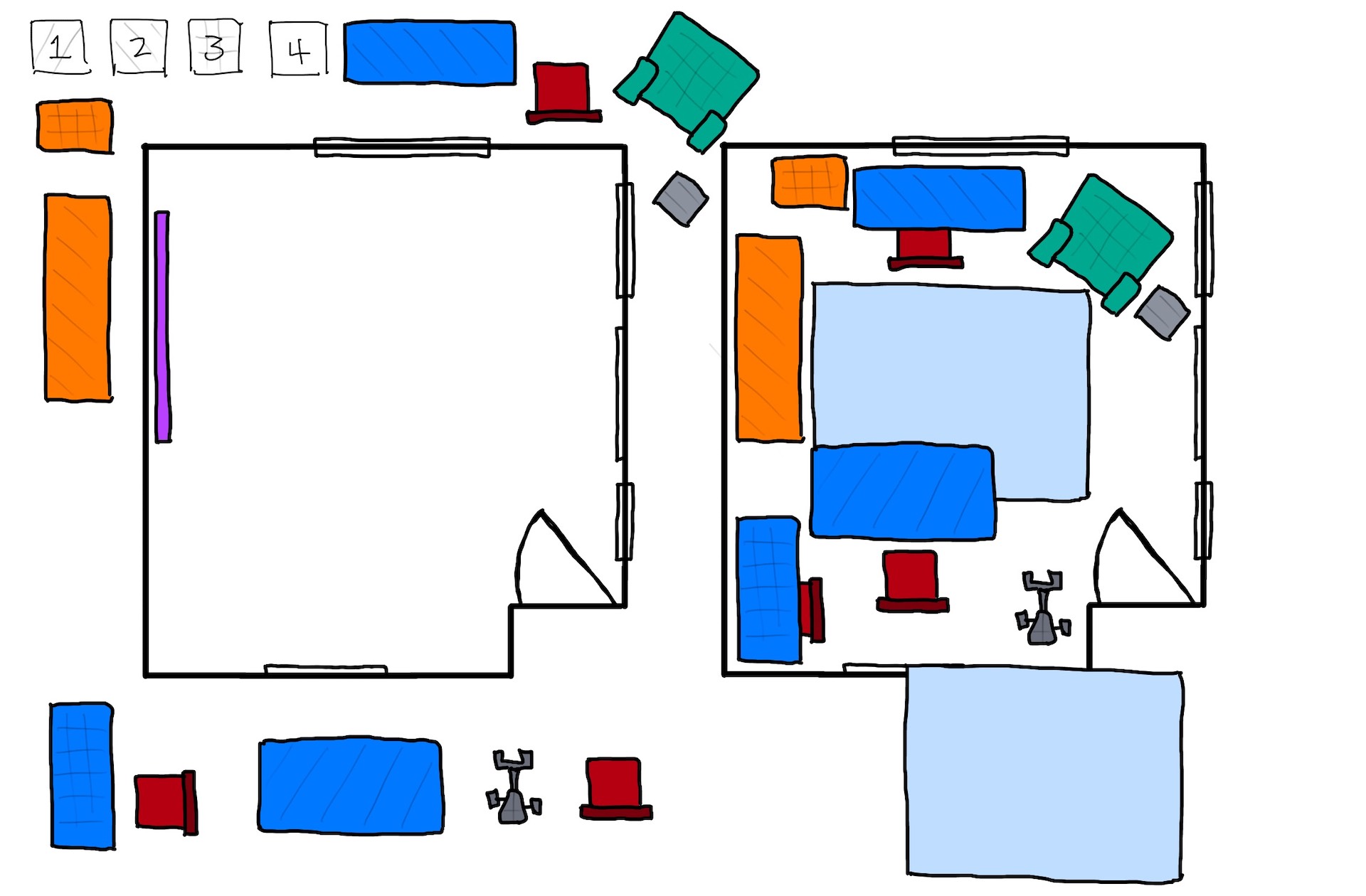 The first round was good, but I realized that when drawn from memory, the dimensions were not accurate enough. Luckily the floor of the office is tile, which made it easy to get accurate measurements of everything the next day.

I went through a second round of virtual rearranging, but this time with more confidence that it would work.

When I showed my wife my plans, she thought that I had redrawn every iteration. That is certainly not outside the realm of possibility, but I didn’t go quite that far this time. My favorite drawing app, Linea Sketch, allows me to move objects around.

The whole exercise was definitely a bit of indulgence in my OCD, but not as much as it could have been.

I still haven’t actually moved the office around. The meeting with my friends was postponed, so the project lost urgency. And really, I have already done the hardest part. Now only the small details remain of actually doing the work.

I hope things are well with you. And when they’re not, I hope you can find support. We will all have ups and downs, and have great need of compassion and patience. Sometimes we can offer it, and sometimes we need to receive it. May we do both.

🎉
You subscribed with [email] on [date]. Thanks for joining me!
END_OF_DOCUMENT_TOKEN_TO_BE_REPLACED