This weekly update shares about the fear of fear, building Legos, and the importance of support groups.

This has been a stressful week for so many people that I know, and might have been for you as well. Coming back after the holidays can feel like a slap in the face as we have to confront our many responsibilities. As I will discuss in this update, hopefully we can remember curiosity and compassion as we navigate our daily lives.

Over the holidays, my therapist took some time off. Of course I was glad for her, but it was also a little scary for me. Typically, when I go multiple weeks without a session, my rules start overwhelming me and OCD begins to take over a bit. I felt quite pleased with myself for how I managed myself throughout the holidays, and felt that life was pretty good overall. That said, I was relieved to at least have a phone session last week.

During my session, I shared with my therapist one of my deepest fears. It was something that had only come to me in the past few weeks. It started edging its way into my consciousness after my last discussion with my psychiatrist, but took a few weeks until I granted it full access to sit down with me in my mind. As I shared it, my therapist started to laugh. After a minute, so did I. This is not an uncommon experience in my therapy, as we share a diagnosis of scrupulosity OCD. Many of the issues or difficulties that come with a mental health condition are humorous and even ridiculous when seen in the right light. Often the choice is either to laugh or to cry, and I like to choose to laugh.

Her response was basically,

“Of course you feel that way! How could you not?”

The real problem was not the fear, but the secondary fear—the fear of the fear. This is so often true in life, whether specific to mental health or not. When we are able to sit with our feelings, they are rarely as painful and intimidating as we make them out to be. That is part of why mindfulness is such an important skill in learning to deal with a mental health condition. We need to become able to approach the present moment with curiosity and explore its sharp edges and deep contours, and not just imagine what we think they are going to be. 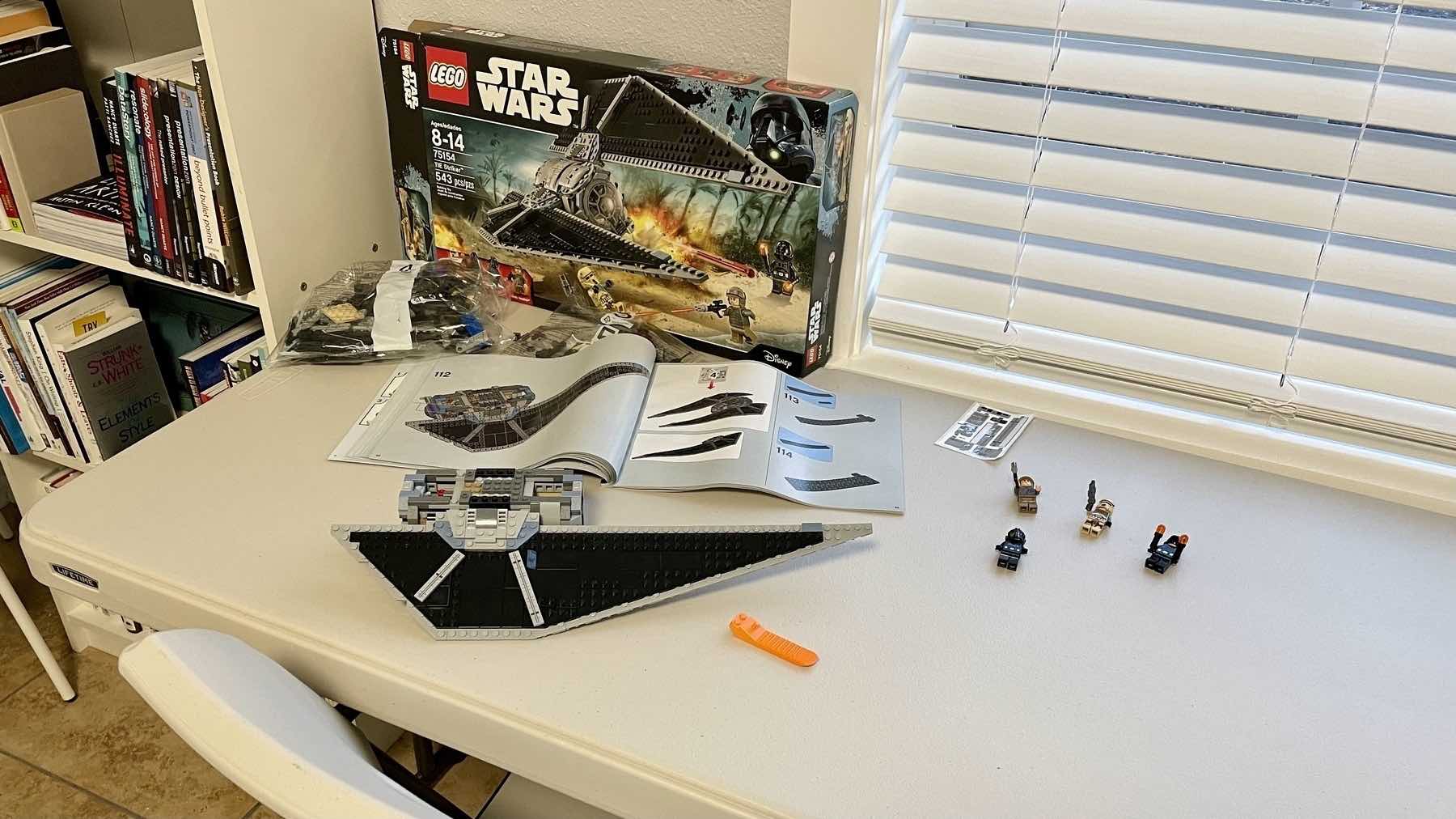 One of my favorite times over the past little while has been lunch. For Christmas, my wife gave me a Star Wars Lego set1 and I have eagerly anticipated building it. I decided I would challenge myself to not build it all in one go. Maybe that’s not hard for you, but the thought of it was somewhat excruciating for me.

In the spirit of trying to live what I was sharing in the first section of this update, I tried to approach the Lego building with curiosity. Even though I have built many Lego sets with my children over the years, somehow the blissful joy of having the pieces separated into bags for different steps was lost on me. As I sat down to build my own set, by myself, all the memories of building Legos as a child came back. Those were glorious hours in many ways, but also frustrating hours. (Rather like being a programmer, now that I think about it…)

On three separate days, I have put together three separate bags of pieces, and have finished just over half of the set. I have enjoyed it so much that I started searching online for the fabled Millennium Falcon set. I was crushed to find out that it is nearly a thousand dollars. As I lamented the fact to my wife and oldest daughter, I was told that I had already gone through this cycle of hope and crushing disappointment years ago when I wanted to build the same set.

For now, I will content myself with enjoying the set that I have in front of me. It is such a nice break for lunch to ignore any Slack notifications from work, and just build for a while. Hopefully as I finish this set, I can find similarly enjoyable lunch diversions.

I was struck this week by the importance of having a support group. As I have mentioned before, I did some time in 2019 at the OCD & Anxiety Treatment Center, which felt liberating and empowering by the end of my intensive outpatient program. Since then, I have continued to join alumni group meetings as often as I have been able, and there was another one last week.

I was a little nervous going into this meeting, because the therapist who had been leading the group since I started attending had left to start a private practice, and a new therapist was taking over. Change is always difficult, but particularly for someone with OCD. The new therapist kept a similar format, and we were able to introduce ourselves, and share something about which we needed support from the group.

As often happens, as soon as I was done sharing the thing I wanted support on, I felt that I had done it all wrong and shared the wrong thing. There were so many other things that were more important that I really did need support on, and I didn’t want to waste time with the incorrect thing that I had said. Instead of interrupting everyone who was trying to help with their comments, I forced myself to just listen. By the end of the session, I felt buoyed up and motivated. I’m not yet doing everything that I want to in order to manage my mental illness, but having regular reminders and support makes it easier to want to.

So much of the difficulties we face in our lives are of our own making. We create expectations for ourselves of how we should be handling things, or all that we should be able to do, or what we should say and do for people. When we allow ourselves to settle in to the current moment, truly feel our emotions, and be compassionate as we try to do our best, we can find that we are not doing too bad. Here’s to both of us getting better at that.

🎉
You subscribed with [email] on [date]. Thanks for joining me!
END_OF_DOCUMENT_TOKEN_TO_BE_REPLACED