This week’s update shares the story of learning a magical word that unlocks my brain and allows me to do more of what I want.

I mentioned last week that my therapist began a session on a particularly difficult day by having me listen to music. This is something that we have done a number of times, and it has always been extremely helpful. After a recent session, she had assigned me as homework something funny to watch. When I texted her to report on how well it went, she was glad, but unsurprised.

I think I might move into solely cinematic/musical/comedic therapy as a new treatment type. Nothing works better. (Plus add Jesus). Ha.

This week, I wanted to share the story of that funny video and how it has transformed my life.

To set the context for this story, I will go back to the end of January. Life was stressful for me as I was transitioning to my new job. I had an experience that threw me completely off, and my therapist worked with me on the skill to recognize and share, “This is what I can give…” I wrote about that in update #67: What I can give.

Since that time, I have been working to try and be more emotionally honest, both with myself and with my wife.

As we got into February and March, my therapist said we needed to swing the pendulum almost to the other extreme for a little bit, and then come back to balance in the middle. We were talking about plan changes and how difficult it was for me to adjust to the needs and demands of the family when things inevitably went differently than anticipated.

When I would describe any situation in which I had to adjust, there was so much overthinking, and so much resistance. My therapist said I needed to just relax and do things without thinking about it.

She pulled up a Saturday Night Live clip of the character Chad for me to watch. She said I needed to get to the point where I cared just as little as he.

Now that I knew the character, she wanted me to watch another clip where he dies and meets his dad. As is stereotypically true, discussing father issues is a recurring and painful part of my therapy. Again, she wanted me to tap into how unconcerned Chad was about something that could have been monumental.

As I left therapy, my therapist said that she needed a thousand “Ok!”s from me that week.

That evening on a date with my wife, I showed her the videos and we laughed about it. Part of what was funny was how unlike me Chad is. The idea that I could think or care so little about something was laughable.

The very next day, we had family plans in the evening, and I was going to need to leave early from work. My wife texted me that morning:

And actually, I think we will need to leave here by four… Can you be back by 3 instead?

I replied immediately with, “Ok!” knowing she would hear it in Chad’s voice.

And, that is an unprecedented response and it feels amazing on my end. Thanks. 🥰

Later that day, she texted me about how things were going:

Again, I replied with “Ok!”

Oh my gosh this is amazing

I found it to be helpful even when I just caught my brain getting stuck on something. I went to turn on a show for the kids, and found that someone had rearranged the apps on my Apple TV. Immediately, irritation surged in me and I started to say something. But I caught myself, and said out loud, “Ok!”

My wife was nearby and had witnessed the whole scene. She commented,

Even if it only lasts a couple days, this has been completely worth it.

I found a video in which someone compiled every time Chad says, “Ok!” and I have been watching it almost daily.

As I shared the success of this practice with my therapist, we took some time to discuss it. I was particularly happy with my wife’s response. My therapist pointed out that most of the things that I had been saying “Ok!” to were normal changes that everyone navigates. The fact that my wife was blown away by my “unprecedented response” was more of an indication of how difficult it has been to live with OCD.

While it felt like we were swinging the pendulum completely away from identifying how I felt and what I could give in the moment, the truth was that these two principles were in complete harmony. Part of what “Ok!” unlocks for me is the ability to slip past OCD and allow myself to do something normal without the typical levels of irritation and resistance.

Over the coming week, the challenge for me, and for you if you’ll join me, is to just say “Ok!” more. If there is a strong and important reason to say no, we won’t do it. But for most everything, let’s go with it. We’ve got this. 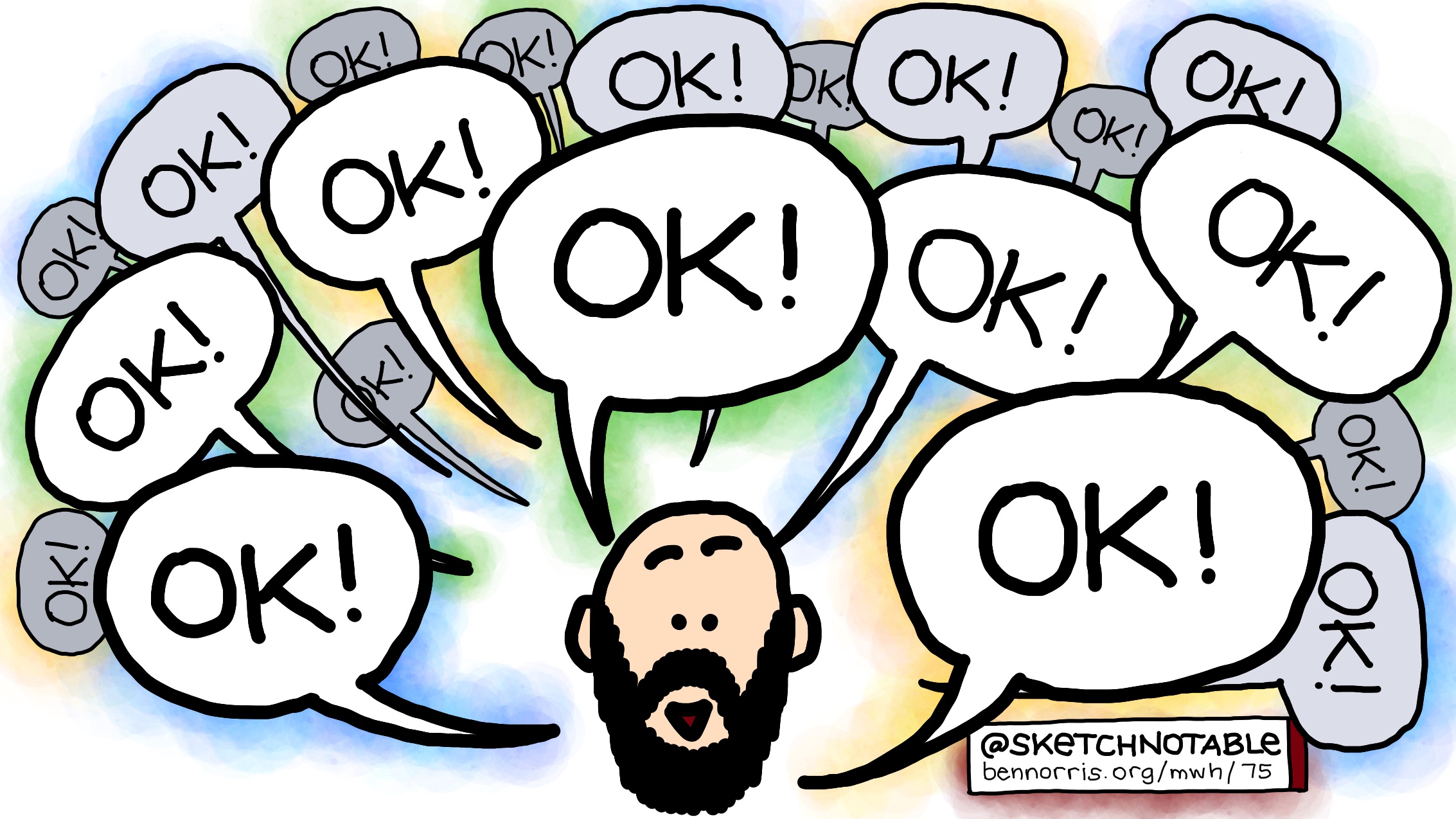 🎉
You subscribed with [email] on [date]. Thanks for joining me!
END_OF_DOCUMENT_TOKEN_TO_BE_REPLACED