This past week, I finally broke my journaling streak in Day One. It was not easy, but it was worth it.

Streaks are powerful, and for most people, helpful. Once you have done something for enough days in a row, internal pressure builds up that can push you to keep doing that thing.

Austin Kleon shared Jerry Seinfeld’s method in his book Steal Like an Artist (emphasis mine):

The comedian Jerry Seinfeld has a calendar method that helps him stick to his daily joke writing. He suggests that you get a wall calendar that shows you the whole year. Then, you break your work into daily chunks. Each day, when you’re finished with your work, make a big fat X in the day’s box. Every day, instead of just getting work done, your goal is to just fill a box. “After a few days you’ll have a chain,” Seinfeld says. “Just keep at it and the chain will grow longer every day. You’ll like seeing that chain, especially when you get a few weeks under your belt. Your only job next is to not break the chain.”

For much of my life, I was motivated by this and similar methods. As digital tools took hold in my life, it became even easier to measure and track such streaks.

Just over 8 years ago, I got a Nike FuelBand. There were all sorts of awards for being active, and I became, well, obsessed with earning them.

We did a healthy eating challenge as a family a couple times. The first time, everyone else had given up after a week or two. I keep going through all six weeks, dutifully earning every available point each day.

I told myself that it was a good thing to be focused on my health and activity. And that is certainly a good thing. The problem comes when the distress of considering not doing something is so high that it causes issues in my life and relationships. This is the sort of excess I described earlier this week: Mental illnesses exaggerate.

The second time that we did a health challenge as a family, my brother and his wife decided to round up and make the available points 10 each day. 6 were from eating, and then the remaining came from 30 minutes of exercise each. This time, there were some friends involved that didn’t know me. Their attitudes went from impressed to annoyed to incredulous that I was really doing two hours of exercise every day to maintain an unbroken streak of perfect days.

I explained to them, and justified to myself, that I was merely using a personality quirk to good effect. It was easier for me to make space in my life for two hours of exercise than it was to consider missing a day. My wife was patient at first, but she also became annoyed as I would pace in our house each night to get my points instead of spending time with her.

The distress I felt at the idea of breaking my streak overrode everything else.

Later, when I learned about OCD, I could recognize that this is a classic manifestation. One of the measures of the severity of the disorder is to identify how many hours a day are being spent performing compulsions. This is easier to notice and address when the compulsions make no logical sense. Much harder when they can pass as good things to be doing.

My particular flavor of OCD, scrupulosity, can be particularly difficult to recognize. Most of the obsessions and even the compulsions are mental. So much time is spent ruminating, planning, or reviewing, but that is not visible to anyone else. One of the first casualties of any mental illness is insight. This is a vicious cycle.

Part of the reason this is so difficult for me is that many of the things that my brain latches onto and turns into compulsions start out at things I actually want to be doing. I wrote about an instance of this happening with Marvel Comics a few months ago in update #58: Civil War.

This is exactly what had happened with writing in my journal. This is an activity and habit that I value. I enjoy reading past entries and reflecting on what I’ve learned and how I’ve grown.

The issue started with my Mindful Sketch exercises. They were a great tool to help me through some difficult times. But then I got to the point where I was doing them not for any benefit, but as a chore. I mentioned to my therapist a couple weeks ago that I had finally forced myself to stop doing them every day and just do them occasionally as needed. “I like that much better,” she said. “It was getting close to the point where I needed to take them away from you.”

This happened to me recently with my morning routine as well.

I hadn’t yet realized that I had become obsessed with journaling. But there were a couple times that I went back a few months and added an entry on a day here or there to fill in the gaps. Day One has a streaks feature, and so it was in my face every time I journaled.

Finally I had a day last week when I didn’t enter anything. When I realized it the next day, I was flooded with emotion. Interestingly, the predominant feeling was relief. The distress was still there, but it wasn’t as loud or as painful as I had thought it would be. 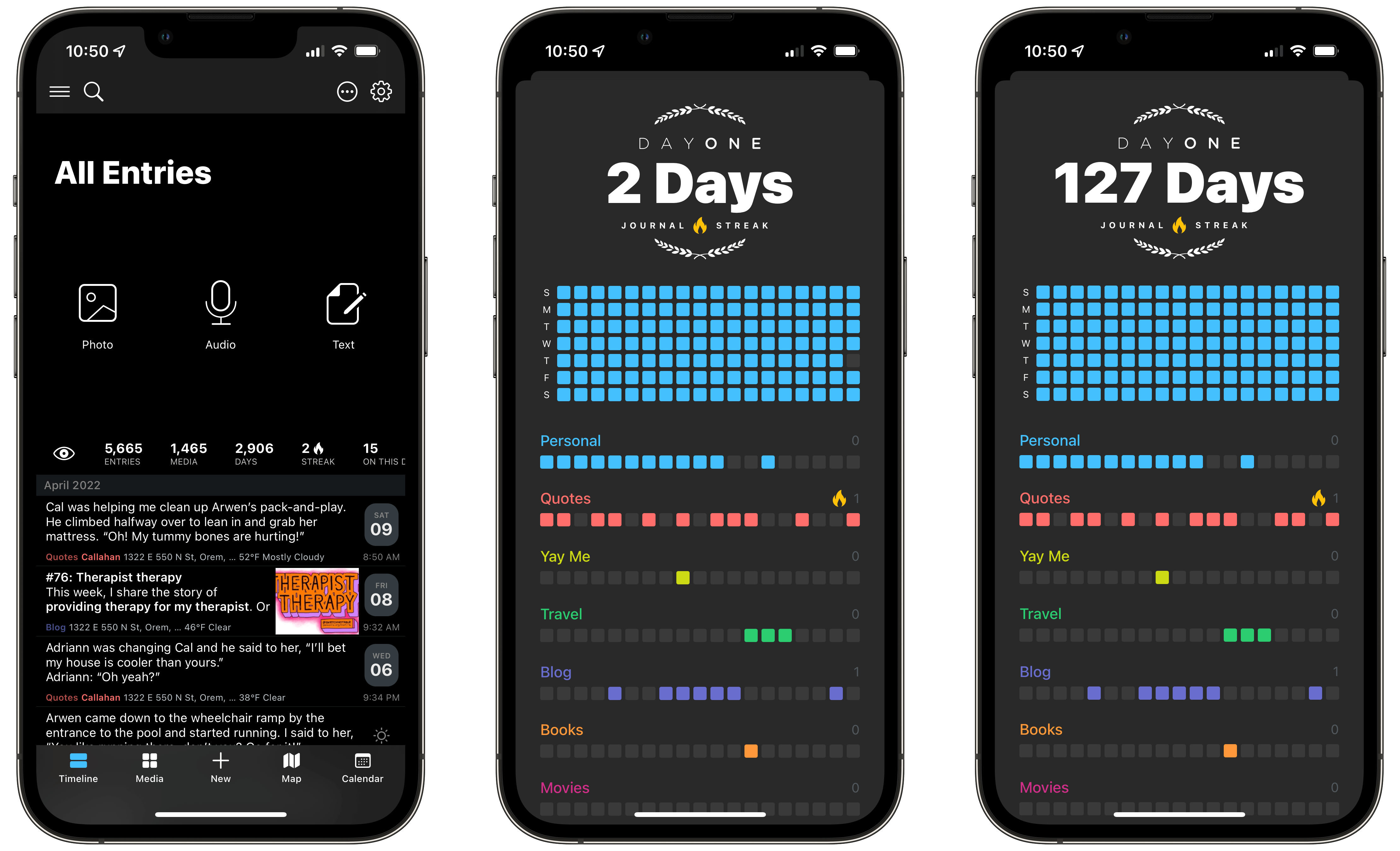 The temptation was strong to “cheat” again. To go back and fill in a day. As you can see in the images above, it would have been so easy to transform that streak of 2 days back to 127.

But this is part of my recovery. I can choose when I want to do something. My mind can clamor all it wants, and often, I will give in and do what it wants. But when I can catch it, I can remember that I have the power to decide.

There will be times when I choose to stop doing something that is good, and that I value doing. When I am not able to do it because I want to, and instead feel like I have to, then is the time to challenge myself.

One of the lessons I take from this experience is a reminder that my brain lies. When OCD is in control, my brain rules with an iron fist. It’s a strength coach with a gun to my head demanding change instead of accepting me as I am and encouraging me to improve.

One of the lies is an exaggeration of the emotional pain in store if I don’t toe the line.

This is why I wrote about the necessity of distress tolerance in my piece about exaggeration. When we allow ourselves to not live by fear, but to make choices and sit with the actual emotions that arise, they are rarely as intense as we fear.

This week’s call-to-action for me, and for you if you’ll accept, is to stand up to our brains. We all have the experience of fear telling us not to do something. Often, that’s good and healthy, and we should listen. Our bodies have the capacity for fear with good reason.

But when the fear starts to hold us back from what we want to be doing in our lives, we need to push back. Risk the emotional storm, and sit with whatever comes.

This is a skill that we can practice and learn.

Just remember an extra dose of kindness. This is hard.

🎉
You subscribed with [email] on [date]. Thanks for joining me!
END_OF_DOCUMENT_TOKEN_TO_BE_REPLACED